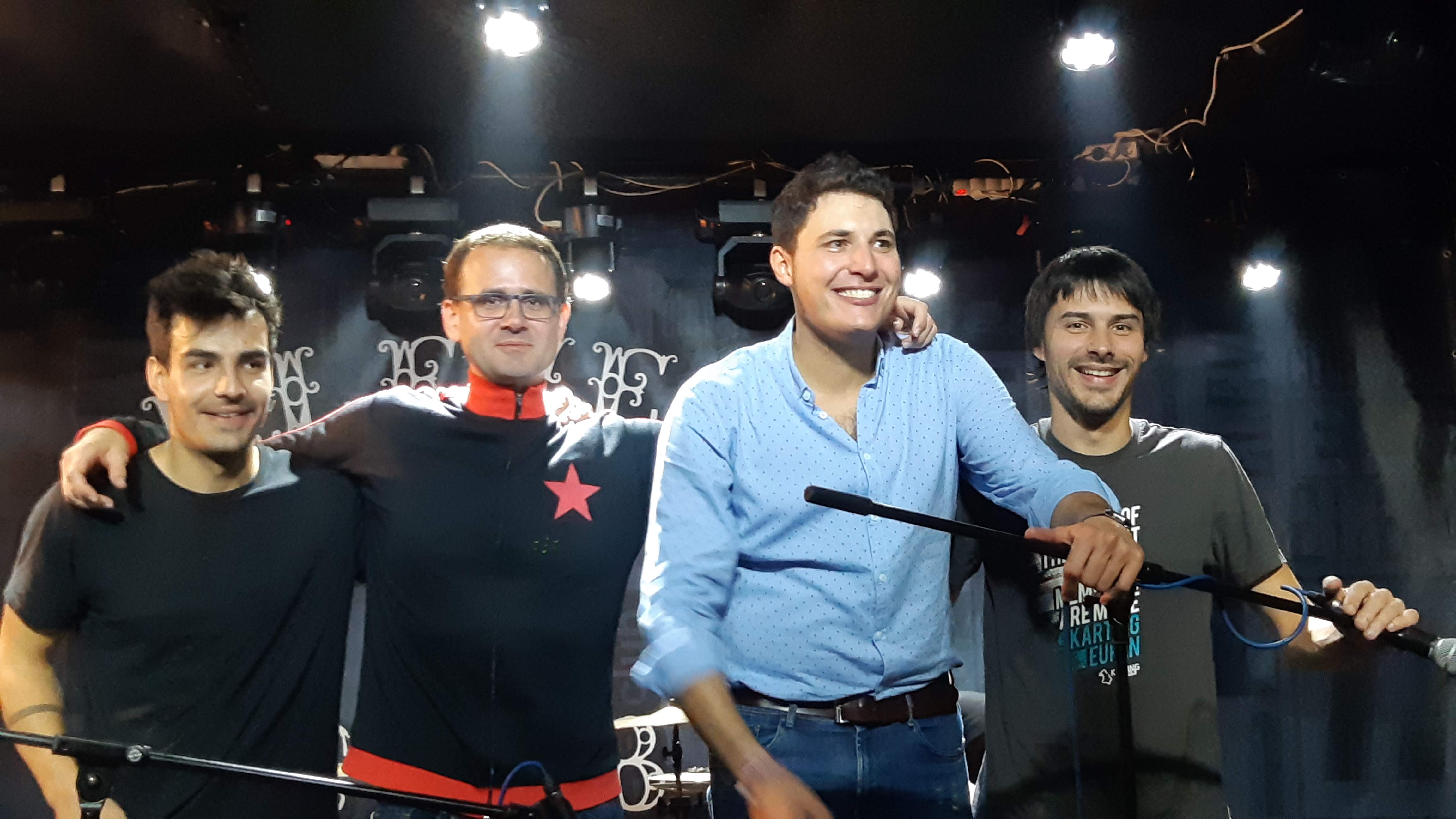 The future Permanent Risk began to take its shape at the beginning of 2018. After several years of taking it easy, Vlado realized he needed a band. When he found out that his colleague at work Enrico played drums, the question was ineluctable: Are you going to play in a band with me? Enrico was nightclubbing at the moment, however, responded affirmatively immediately. Their first rehearsal took place on 7th February 2018.

The search for the remaining band members began without further ado. We first met Ondra on 5th March, however Enrico was not there as he went to Italy. Ondra added his cool solos to the songs there and then, so the decision was quick. The ad for a bass player was answered by four people but Tomáš was a shoo-in already since he rehearsed with us for the first time on 2nd May.

Then we were finally able to rehearse properly but it was only after we began to think of the first concert that we had to find a name. We agreed on Permanent Risk in October.

The first gig finally took place on 8th December at a private birthday party in the Rusty Nail club in Brno.

In February 2019 we spent three days in a studio where we recorded seven songs that we later released on a CD.

However, in April Ondra told us that he was going to move to Canada for at least a year... So we had to start looking for a replacement. It was Kuba who became the successor, but by no means is he a mere substitute! He's a great guitarist, which he proved already at his first gig with us in October in the Eleven club.

Then there were another changes at the bass player's position. In 2020 Tomáš was replaced by Honza and then Milan took over from him at the end of 2021. We immediately started to rehearse to get ready for next concerts and recordings.

Still don't have enough? So here's really everything, event by event, fact by fact:

Where: Stará Pekárna, Brno
What: Concert with Krize Identity |
Setlist: right here
How it was: We're back again in Stará Pekárna, this time joining the Krize Identity band from Olomouc. It was a great gig even though we overran the time limit of 10 PM and the sound tech guy didn't let us play an encore. Anyway, we put on a new song after some time and we will simply play the encore next time. 😉
Video: Invitation, V moci tě mít, Cestu svou
Audio: Full concert

Where: Stará Pekárna, Brno
What: Concert for Ukraine |
Setlist: click here
How it was: This time we combined forces with an "Unknown singer" (from Byl pes) and Lucia Piussi (from Terrible 2s), and gave a concert in order to support those who were forced to flee their homes due to an unjust war. The concert was under the auspices of Masaryk University's Volunteer Centre MUNI HELPS and all proceeds went to a summer camp for Ukrainian children.
At the same time it was our first gig with a new bassist, so... "ladies and gentleman, please welcome Milan!" 🤟
Video: Start It Over

Where: Oblast, Brno
What: A gig at a new venue |
Setlist: here it is
How it was: Covid is still around, so this was our only concert in 2021. Another gig where the sound engineer didn't come along, but we did the job ourselves and the crowd was happy. It was our first time that we didn't play songs in English only - we converted four of our older songs to Czech, and we played two brand new songs in Czech as well. Unfortunately, this was our last gig with Honza, who decided to sideline music at the moment. So definitely there will be challenges for us in 2022!
Video: Invitation, Všechno, co teď mám, Ease Away 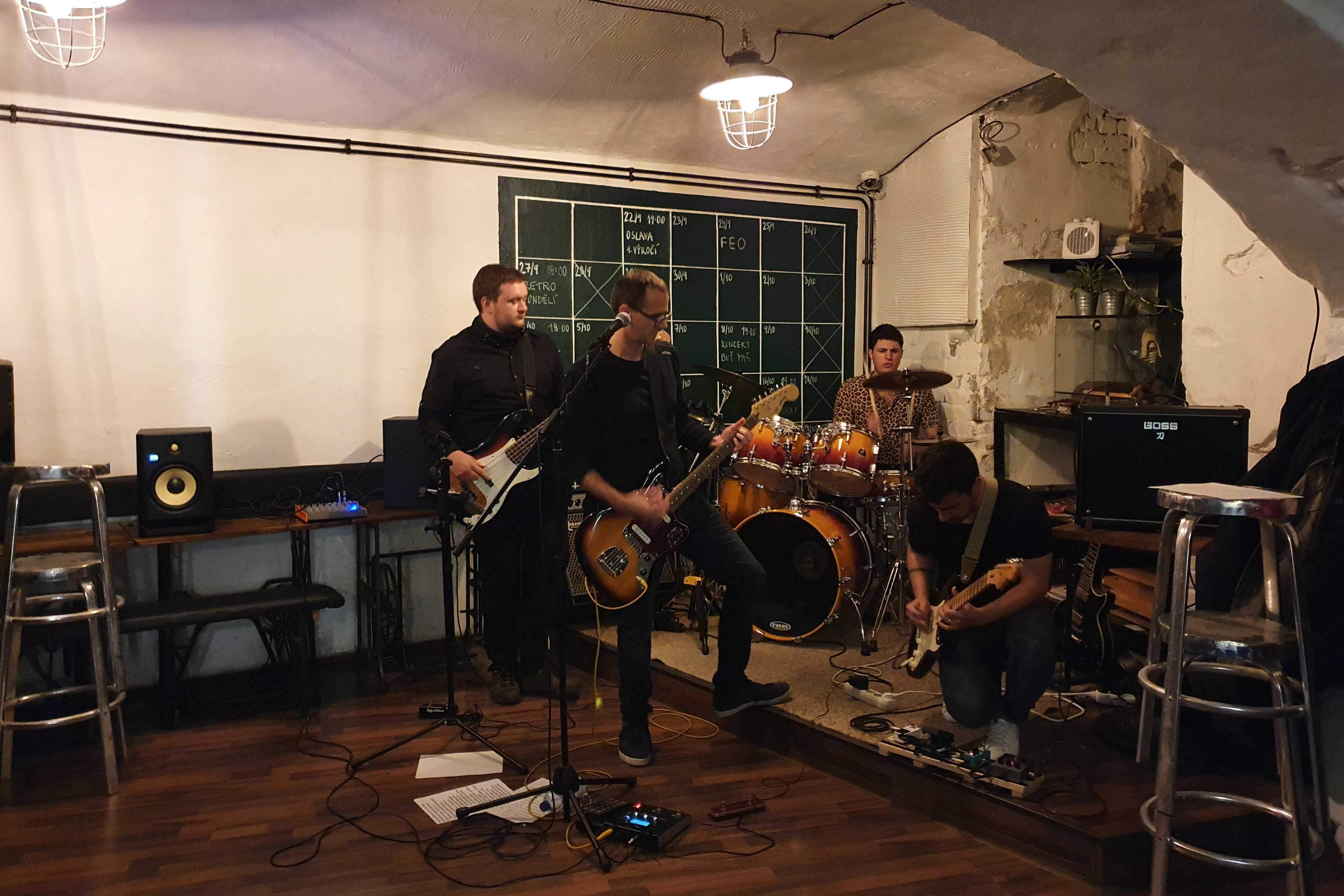 Where: Stará Pekárna, Brno
What: Our second gig in this club |
Setlist: check it out here
How it was: First concert with Honza on bass. It was an uncertain covid time, but a successful gig in the middle of a hot summer. Stará Pekárna has a great atmosphere, which is impossible not to exploit on the stage and play with all the fervour! :-)
Video: Find A Soul

Where: Rusty Nail, Brno
What: Concert with Future Gravity |
Setlist: here
How it was: Our first concert in 2020. We returned to the club in which we'd played our very first gig in December 2018. This time we were the support band for Future Gravity from Prague. It's difficult to tell how the evening would end up without them because the sound engineer didn't show up, but the guys from FG saved the day for both us and themselves and in the end we played a good gig to everyone's satisfaction :-)

Where: Moravské náměstí, Brno
What: Advent Market | Facebook
Setlist: click
How it was: In the middle of Advent we played at the Christmas Market on "Moravák" in Brno. It was freezing and snowing outside, but nice and warm in the tent, so the audience were happy, and so were we. Enrico played on his good old Italian drums for the first time, we played Ease Away for the first time in front of audience, in which Vlado played his ukulele for the first time. A perfect beginning of Christmas! 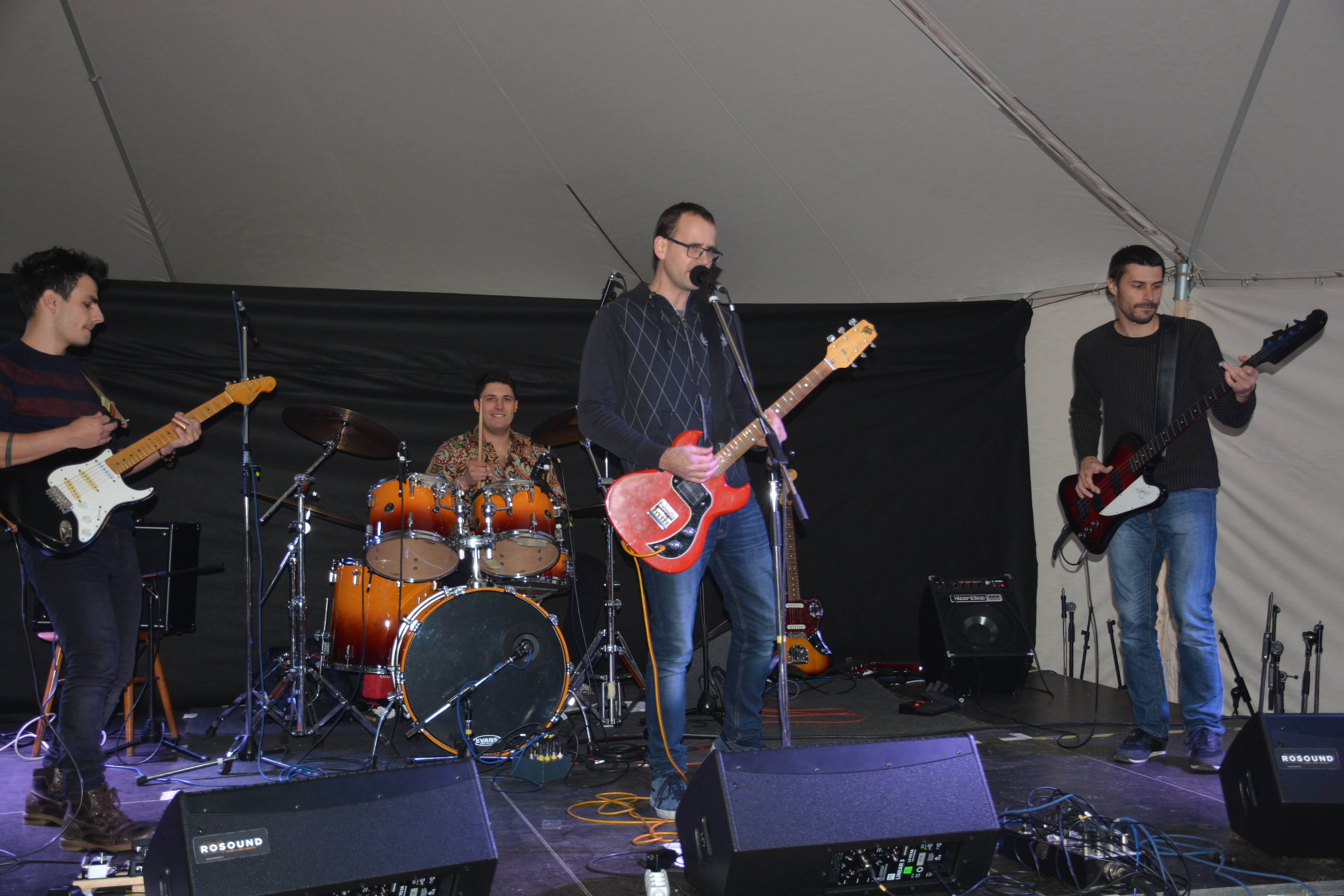 Where: Eleven, Brno
What: Concert with Enable | Facebook
Setlist: click here
How it was: The concert with Enable was agreed on already some time ago. We opened the evening and they followed as the main stars. For us the important thing was that it was our first gig with Kuba because Ondra is going to go to Canada. There was not much time for rehearsing, we skipped two songs, but Kuba was great and we played a successful concert!
Video: Invitation, Swayed And Astray

Where: Nížkovice (Sokol gym)
What: LowLand Night vol. 1 (w/ Psychodelikt + Unknown + The Desperate Mind) | Facebook | Poster
Setlist: here it is
How it was: A Nížkovice band called Unknown, which in April played with us at our first EP launch party in Desert, invited us to their event "LowLand Night vol. 1". We played as the last band in front of a local audience, which was not very large but seemed to enjoy our music.

Where: Melodka, Brno
What: Starobrno Free Night (w/ Wrak! + Betwind) | Facebook
Setlist: see here
How it was: Our second gig in Melodka, where in February we were selling our first EP for the first time. Half year later we returned and introduced our second EP Sterling Dreams here!
Video: Invitation

Where: Černovické nábřeží, Brno
What: 5th annual Cross the River festival (Svitava Riverside Festival) | Facebook | Poster | Programme
Setlist: here
How it was: The Stará Pekárna music club picked us from bands participating in their Fresh Meat project. We played on the main stage of the festival, which takes place at various points of the Svitava riverside from Bílovice down to Tuřany. We were the last band to play after the headlining Fast Food Orchestra, it was our second time on an outdoor stage, and the audience seemed well content!
Audio: Full concert 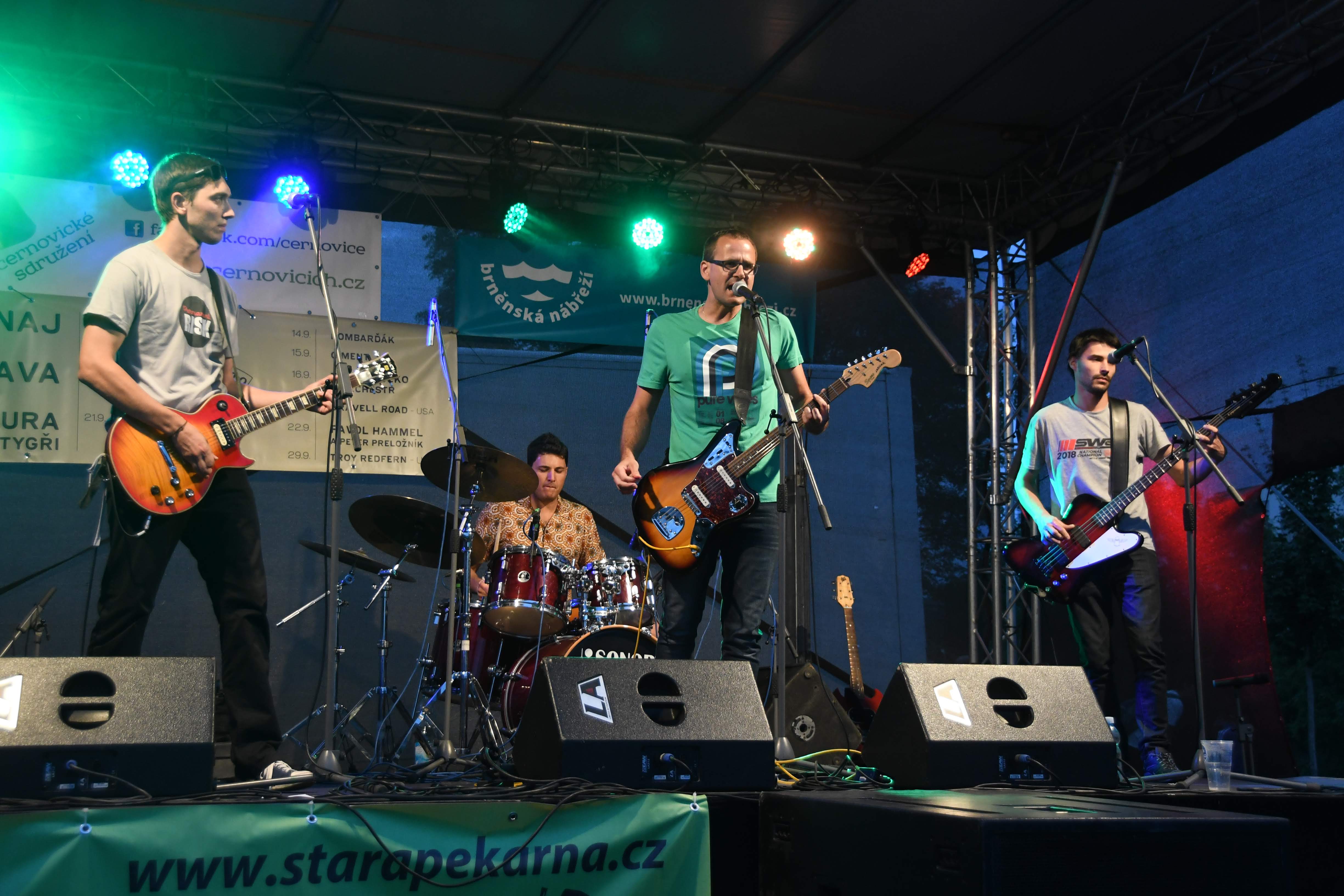 Where: Výletiště, Skalička
What: 3rd annual Rock Fest Skalička | Facebook | Poster
Setlist: here it is
How it was: The Skalička Rock Fest is a conclusion of the HaPe Skalička Tour MTB race. We were the first band in a late hot afternoon, the audience was yet getting ready for the evening, and even if they renamed us to "Pernament" again, we enjoyed our first outdoor concert and also the bands that followed us (Cayman, L.A. Beat, Awake, Assy Rock)! 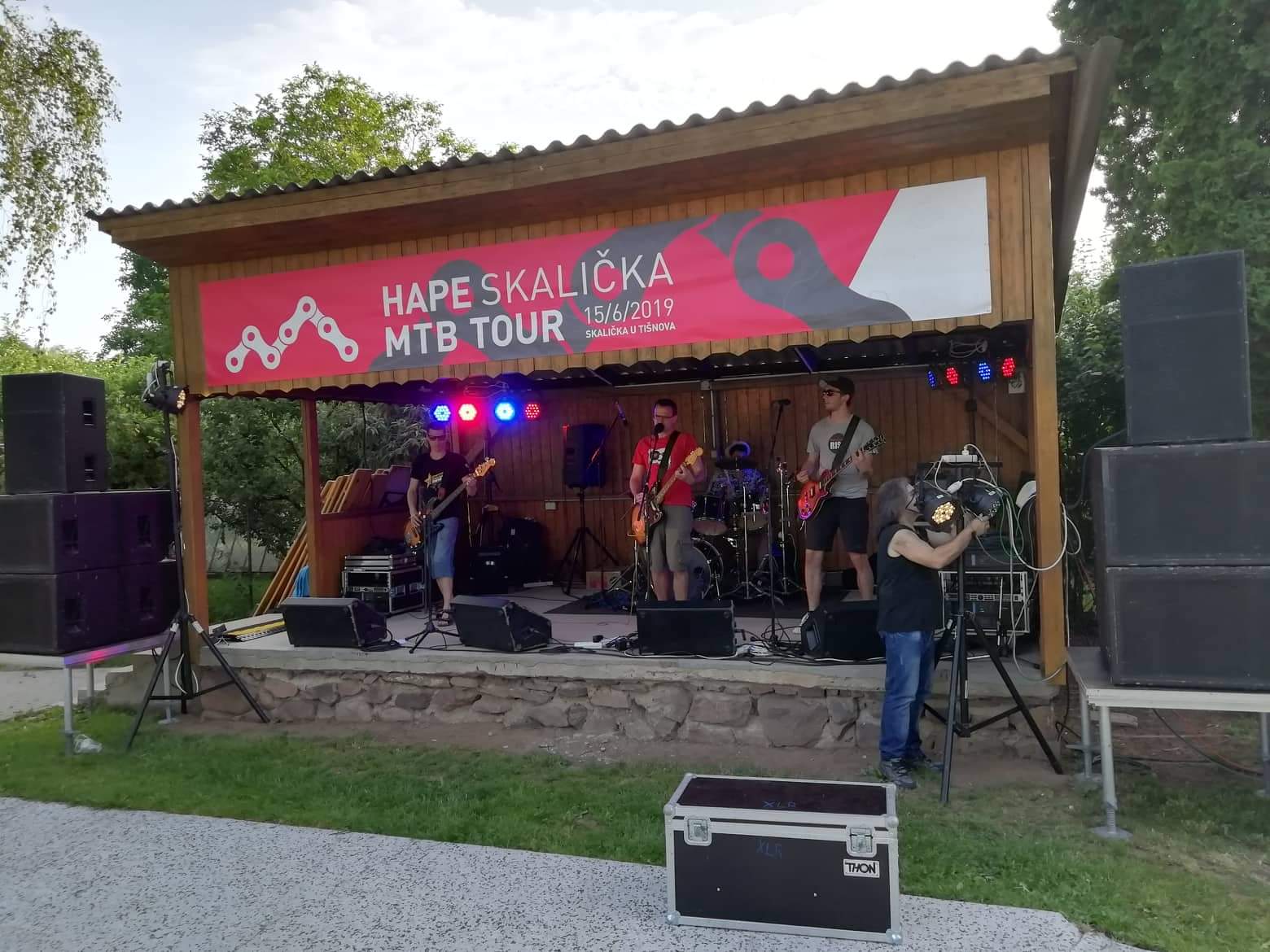 Where: Stará Pekárna, Brno
What: A gig within the Fresh Meat project | FB event
Setlist: Here you are
How it was: We had a concert on a famous Brno stage and we played another new song. The Fresh Meat concerts are usually meant for 2-3 bands but we made it by ourselves. Hopefully we'll get to Pekárna back againg!
Review: This is how the club saw us.

Where: Desert, Brno
What: The Spirits EP Launch Party (w/ Unknown) | FB event | FB post
Setlist: it's here
How it was: We played in front of a great audience, we celebrated our 1st birthday, and DJ Cassio christened our CD. What else could there be?!

Where: Melodka, Brno
What: Pepsi Free Night (w/ Radiosmog + Them Switcheroos) | Facebook
Setlist: see here
How it was: Enjoyed Melodka's cool stage and great people. Actually this should be counted as the first proper concert!
Video: Invitation

Where: Nahrávací studio George Lukase, Brno (links: #1, #2, #3)
What: Recording the EP
How it was: First time in a studio! Recorded 5 songs for an EP that we later called Spirits.
There's also some bonus but it's a secret so far 😉
Really enjoyed working with Jirka Lukášek (the owner of the studio), not to say he recorded harmonica for Music Keeps Me Volant!
Video: We used a couple of scenes from the studio for our Uneven Fight video. 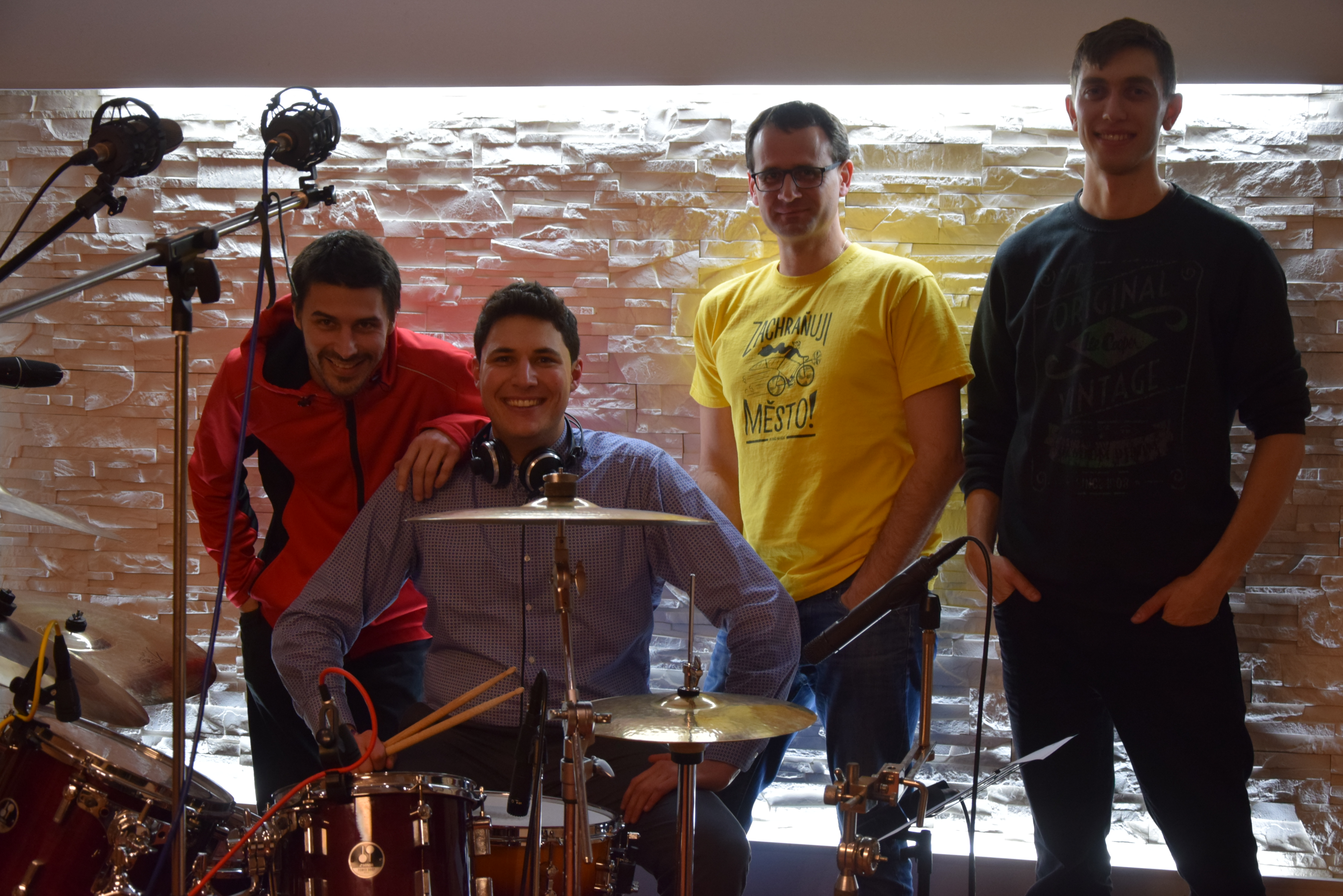 Where: Rusty Nail, Brno
What: Paralelní universita Josefa Šafaříka | Facebook | Poster
Setlist: see here
How it was: We were opening an event called "Josef Šafařík Parallel University". The main part was an interview with Ladislav Heryán, a theologist and a "priest of underground". Half of the audience were our friends, who enjoyed our concert, and so did the rest, hopefully!

Where: Rusty Nail, Brno
What: Private birthday party
Setlist: check it out here
How it was: We played in front of an audience for the first time, so what do you think? We were a bit nervous, but enjoyed the evening in the end. And what's important: those 30 people seemed to be enjoying themselves, too!
Videos: Start It Over, This Is Why